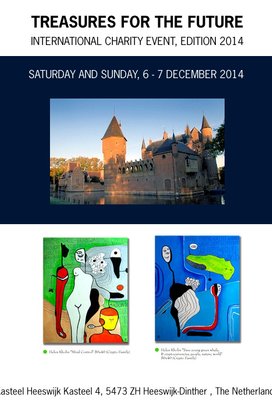 Treasures for the future is a two-day event with a dual goal, on one hand it promotes international artists from a variety of countries who are active in various disciplines, on the other hand it is a charity auction for the ‘Bogotazonderhonger’ foundation. Following the on-site exhibition of artworks, selected pieces will be auctioned and a portion of the proceeds donated to the BogotaZonderHonger foundation. The event is supported by the municipality of Bernheze.
Kasteel Heeswijk, Kasteel 4, 5473 ZH Heeswijk-Dinther, The Netherlands